How to get a body like Keanu Reeves: Upper body workout

Keanu Reeves built an enviable body for his performance in John Wick and The Matrix, with a toned physique and well-developed shoulders.

While Reeves may not be ‘jacked’, this super lean and defined look is one that many of our personal training clients at Ultimate Performance seek to emulate. His leading roles in Speed and Dangerous Liasons in 1994 and 1988 respectively, saw the Lebanon-born actor rise to stardom. More recently, he has featured in Toy Story 4 and Always Be My Maybe, both of which were well received by fans.

However, most film fanatics will recognise Reeves for his incredible performances as Neo in The Matrix series. Ever since his early acting days, Reeves has upheld his slim physique while boasting broad, muscular shoulders. His 2019 red-carpet appearance at the LACMA Art Film Gala with girlfriend Alexandra Grant, is clear evidence of the hard work that Keanu puts in.

If your goal is to develop a lean physique with muscular shoulders, it is important to remember that a well-structured diet will play a substantial part, but resistance training is integral in a quest for bigger shoulders. By training the upper body more frequently, with a specific focus on the shoulders at least two to three times per week, it is more than possible to build a physique like Neo himself. 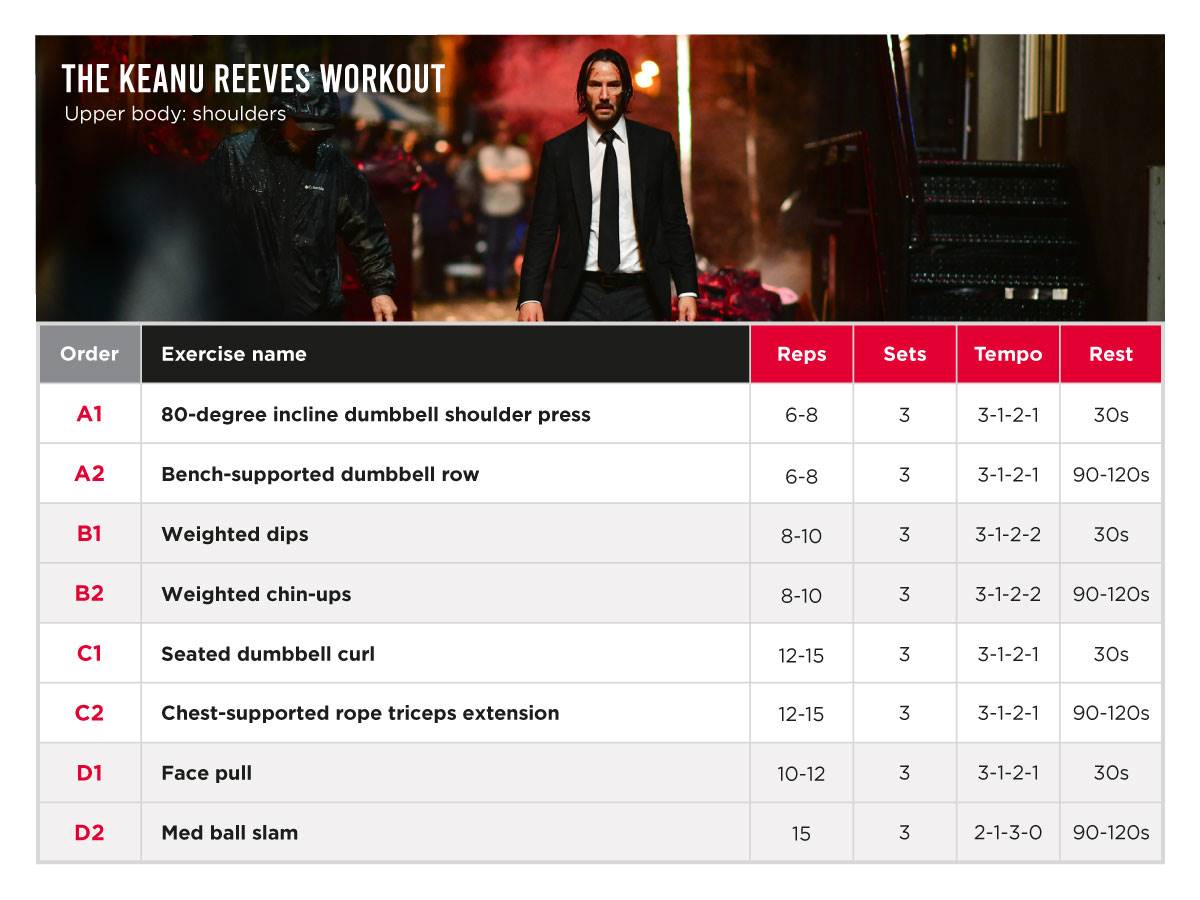 When targeting shoulder development, remember that the deltoids are comprised of three separate muscles; the anterior deltoid (front shoulder), the medial deltoid (side shoulder cap) and the posterior deltoid (rear of the shoulder).

By cleverly targeting each individual muscle, you can ensure rapid shoulder growth and cannonball delts. If you want to really emphasise a specific muscle, it’s important to dedicate enough training volume to that muscle group. As a result, the deltoids are a focus in each series of the workout.

This workout should be performed as paired sets, where you perform one exercise immediately followed by the next before resting. This allows you to perform a greater amount of work volume in a short period.

The exercise pairings should not impede your ability to work to the same intensity when you return to the first exercise. Using different repetition ranges across the workout also allows us to hit both fast-twitch and slow-twitch muscle fibres for maximum effect.