How Jo stays strong and fit at 93

Inspirational artist Jo proves age is just a number – training with Ultimate Performance at 93 years old. She continues to lift weights so she can enjoy good health and carry on her life's work as a celebrated painter. 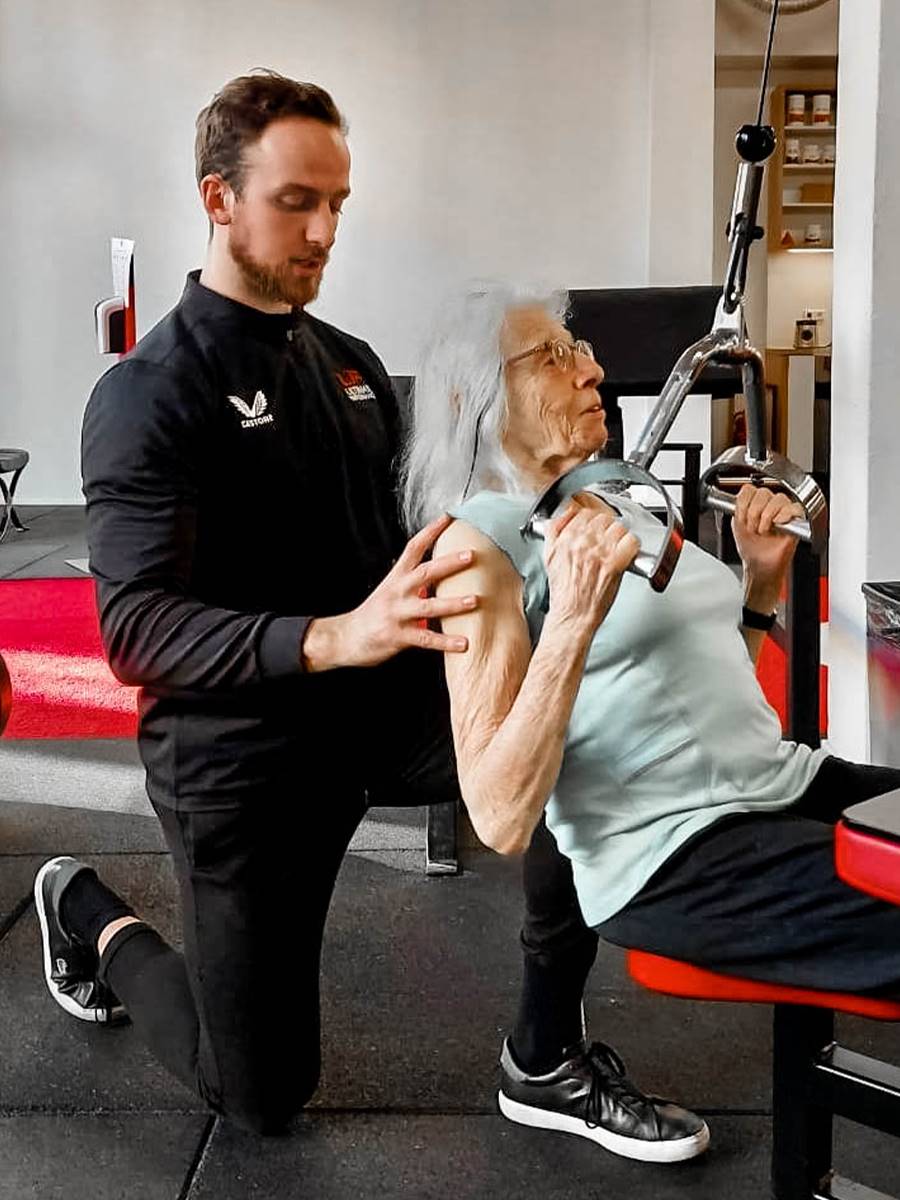 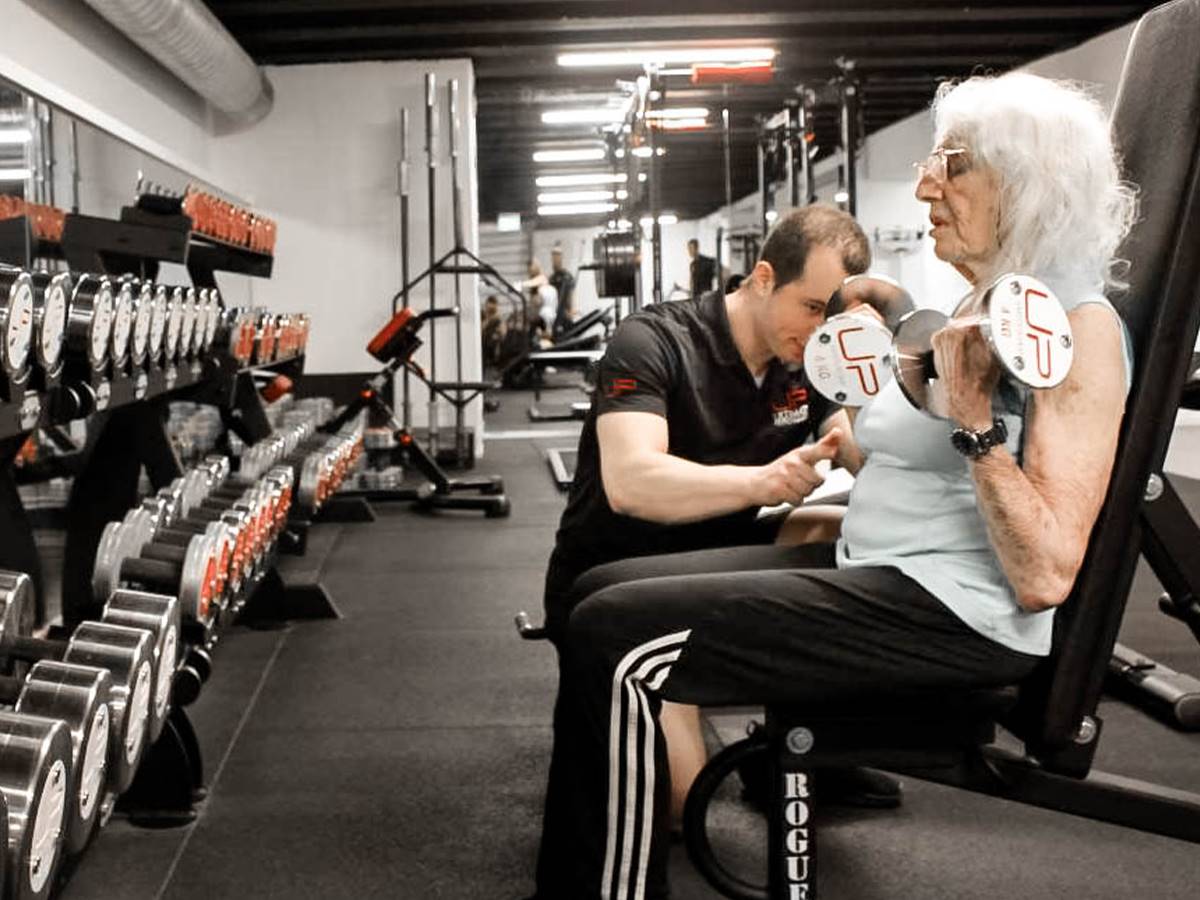 The secret to her strength

At the age of 93, and with a career as a famous painter spanning more than 70 years, Jo Baer could be forgiven for wanting to put her feet up.

And with good reason. As a globetrotting artist, Jo Baer has lived quite a life. Born in Seattle, Jo was a grande dame in the Minimalist art movement in New York in the 1960s and 1970s. Her work has been exhibited in some of the world’s most prestigious art galleries.

Before settling in Holland, she lived in Los Angeles, New York, Washington, London, and during a period of her life spent in Ireland, lived in a castle.

But resting on her laurels is not what makes this remarkable woman tick.

Once a week, Jo makes her way onto the gym floor at Ultimate Performance Amsterdam to do the one thing that has been the constant in her life for four decades, and the one thing she credits with the secret to her incredible dynamism even in her 90s: lifting weights.

A relative late starter to the gym, Jo was in her 50s when she first started picking up weights. 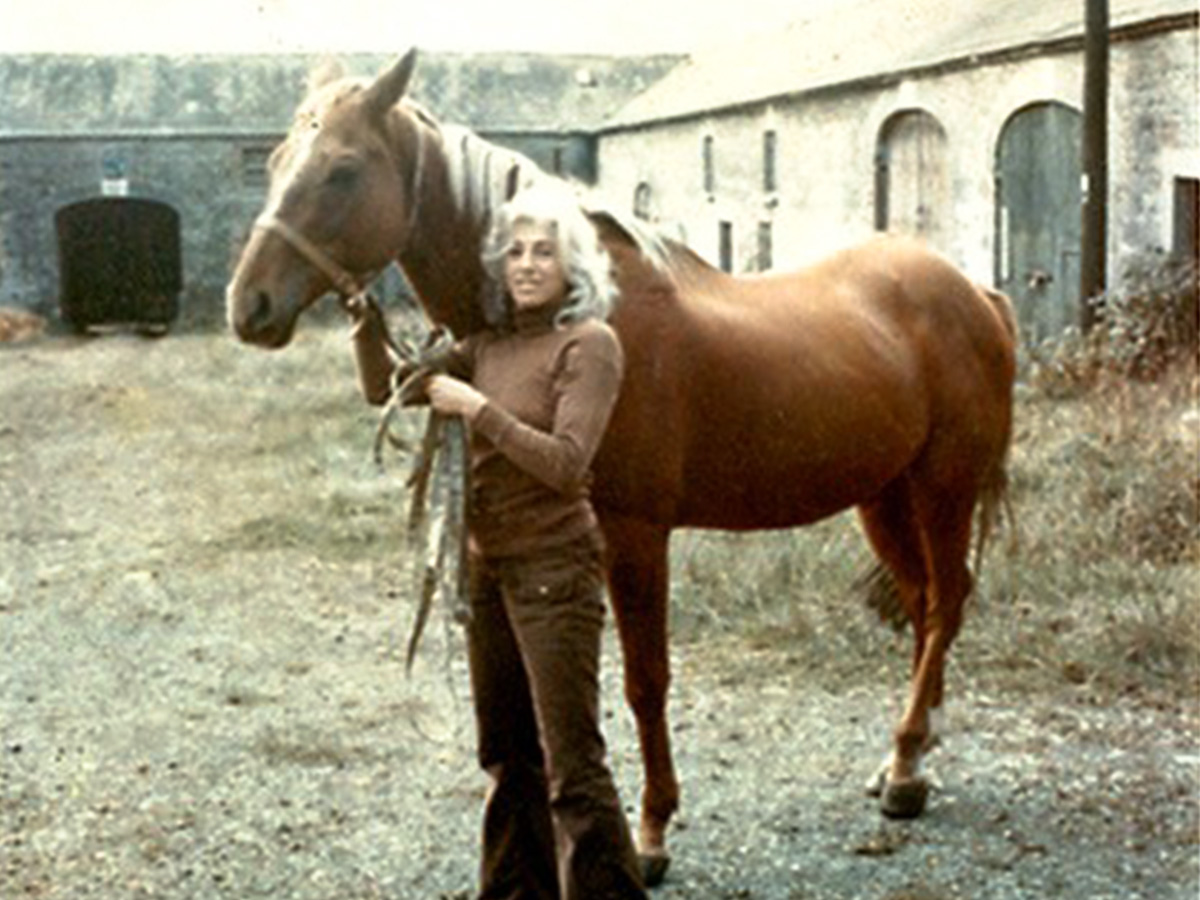 More than 40 years later, she is still going strong, quite literally. Far from acceding to the tiresome myth that people of a certain age are “too old” to lift weights, Jo says it is her fitness regime – and good genes – that keeps her feeling so energetic, living independently, and still painting.

In fact, she is due to exhibit some new paintings in New York later this year. Studies have shown that resistance training is extremely beneficial in ameliorating the effects of the ageing process. Weight training increases bone density, so it can offset age-related problems such as sarcopenia and osteoporosis.

In fact, Ultimate Performance CEO Nick Mitchell has long espoused that weight training should actually be prescribed to elderly men and women, specifically to help them deal with the wear and tear to our bodies that comes with age. 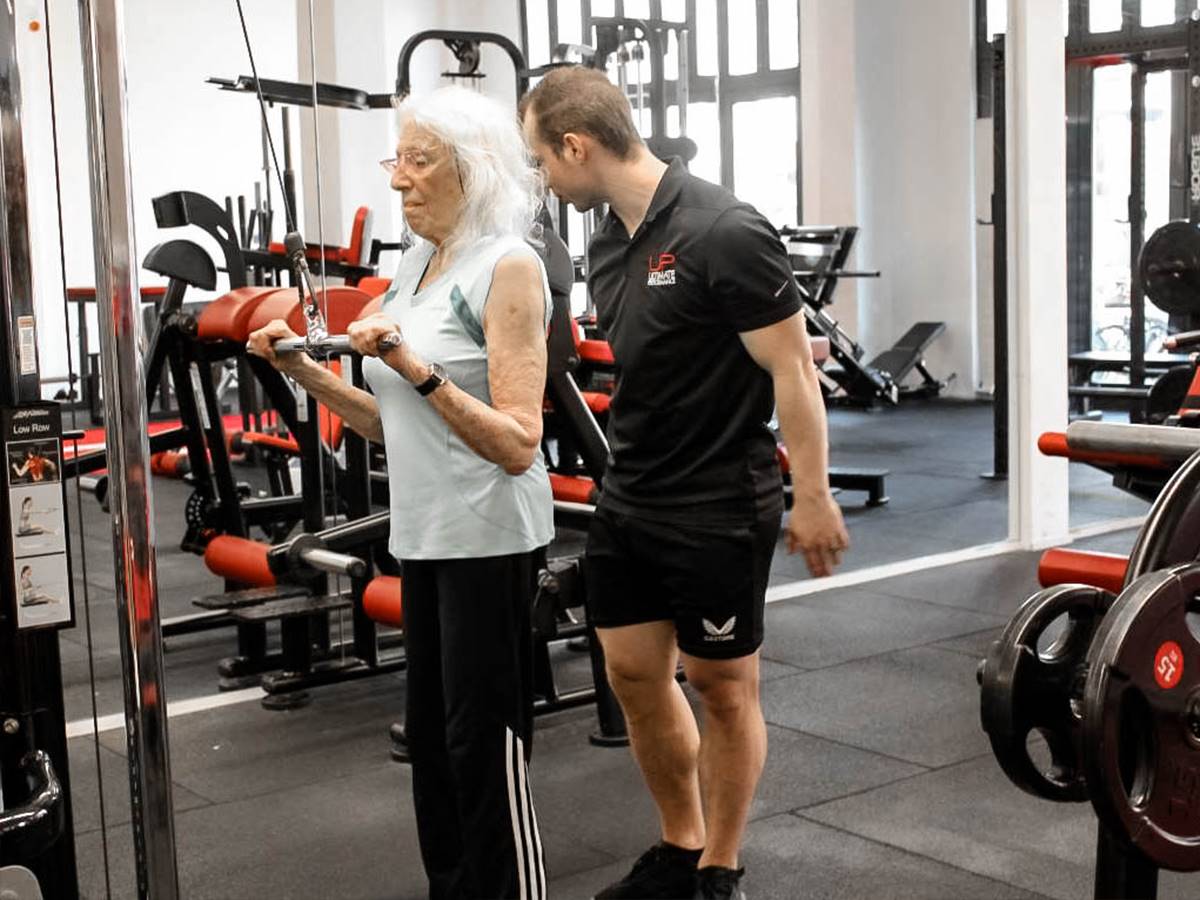 For Jo, what keeps her coming back to the gym week after week, year after year, is that it keeps her strong and vibrant.

“I feel good lifting weights. It’s a wonderful life, and I think that’s what’s keeping me alive and in good shape.

“Working out is helping me stay youthful. I’d recommend it to anybody who is ageing.

“I am lucky. I am built to do it, genetically. My father was a golf champion in the state of Washington, where I come from. And even my mum could hit a golf ball 300 yards! So, I come from a family with athletic builds.” 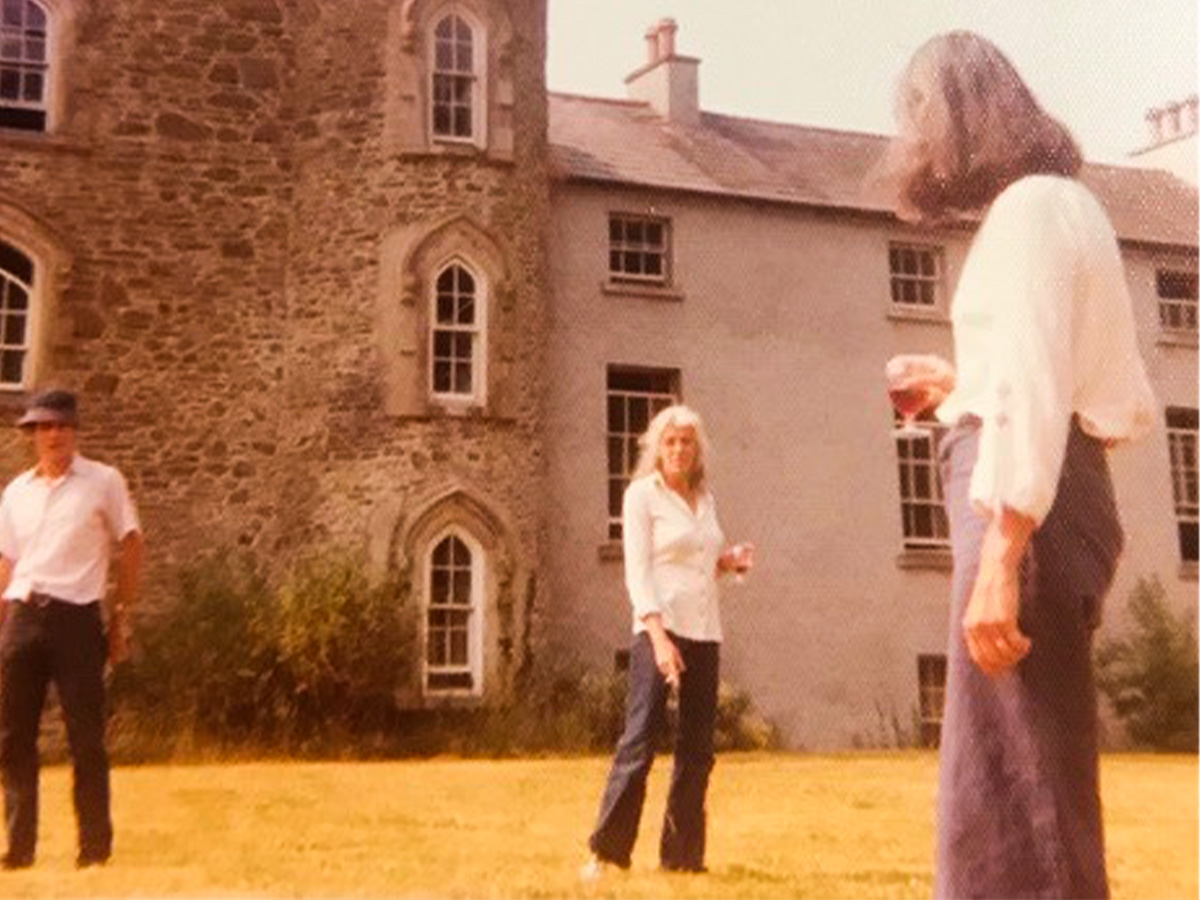 Her love affair with lifting weights began when she was living in London in the early 1980s, at a time when women’s fitness was gaining popularity.

When she turned 50, she made the decision to quit smoking, but then noticed she was gaining weight.

So, at the recommendation of a football coach with Arsenal FC who told Jo she should be weight training, Jo duly joined a gym. 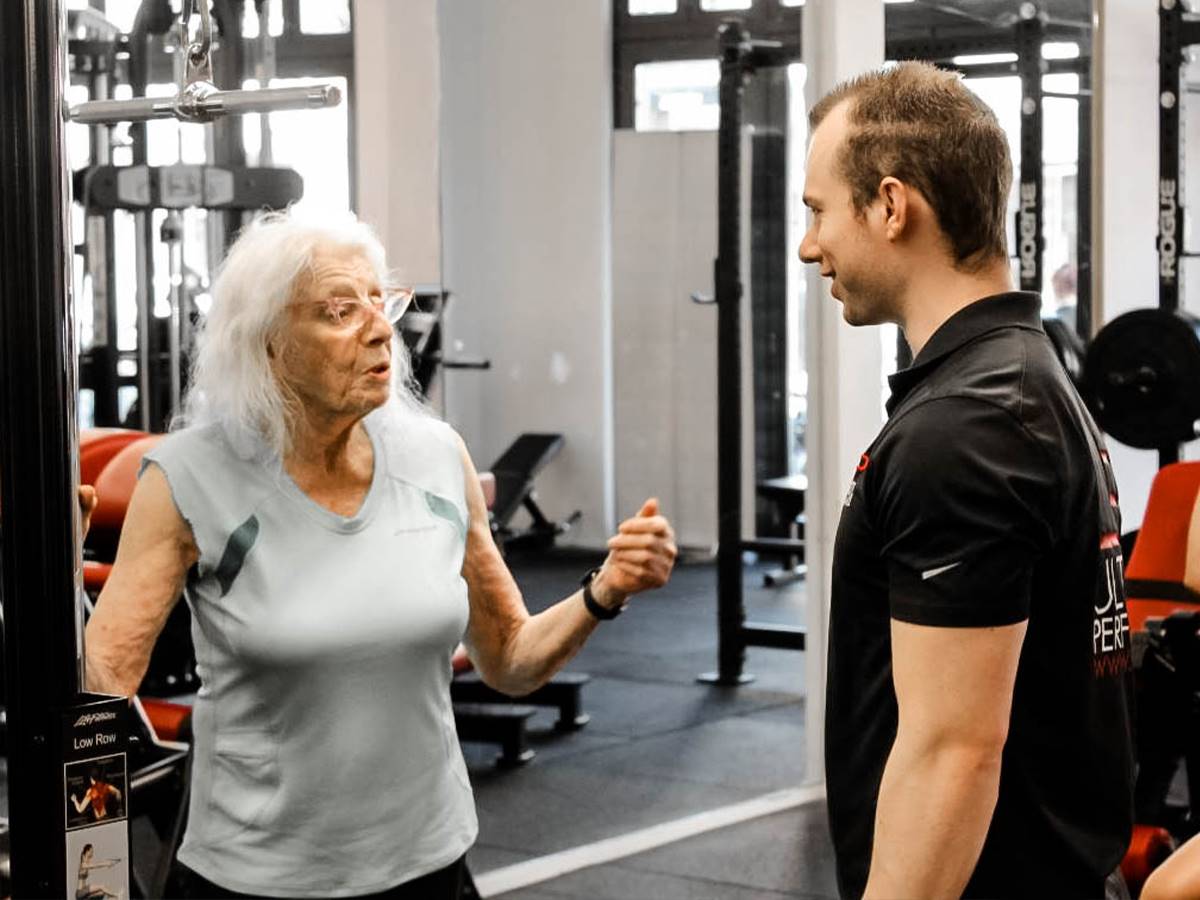 “One of the things I used to do is I would look at the men whose bodies I liked, and watch what they did in the gym, so I could do it for myself!” Jo said.

“Ever since then I’ve been to the gym or I’ve worked out at home, doing push-ups and pull-ups and bits.”

In fact, the only time Jo has ever taken a break from lifting weights over the last 40 years is when she was forced to – due to a hip replacement! 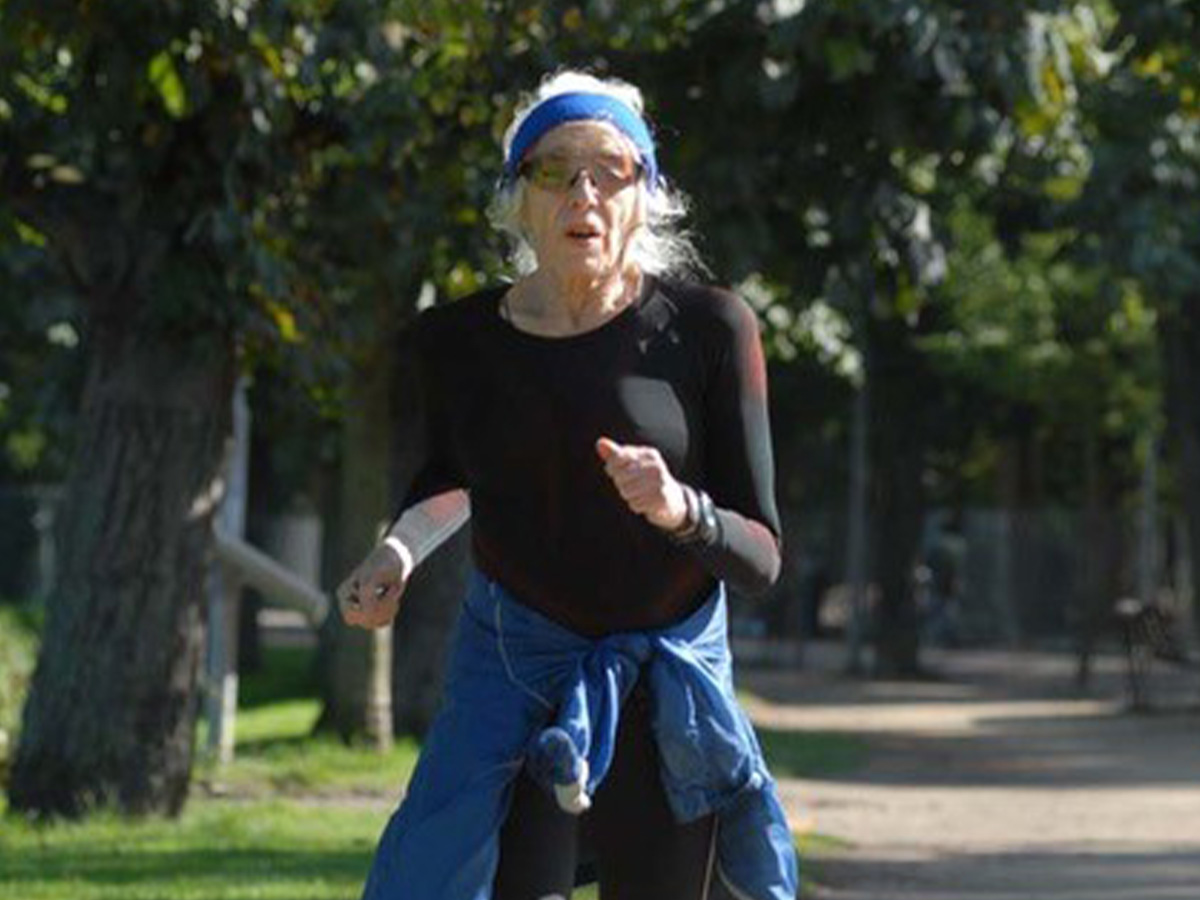 Going from strength to strength

It was in Holland where Jo discovered Ultimate Performance. She joined U.P.’s Amsterdam gym in early 2022, and currently trains once a week. When she started at U.P., she focused on resistance machines to build up her strength and control.

As she continues to perfect her technique, she has started to try out split squats to transition to a more mixed program of free weights and machines. Applying the same determination that has kept her in such good shape for more than 90 years, Jo is working with her trainer to set some new personal bests in the gym.

Jo also credits her resistance training with giving her the strength and mobility to pursue another of her passions – long walks, every morning, at 7am. 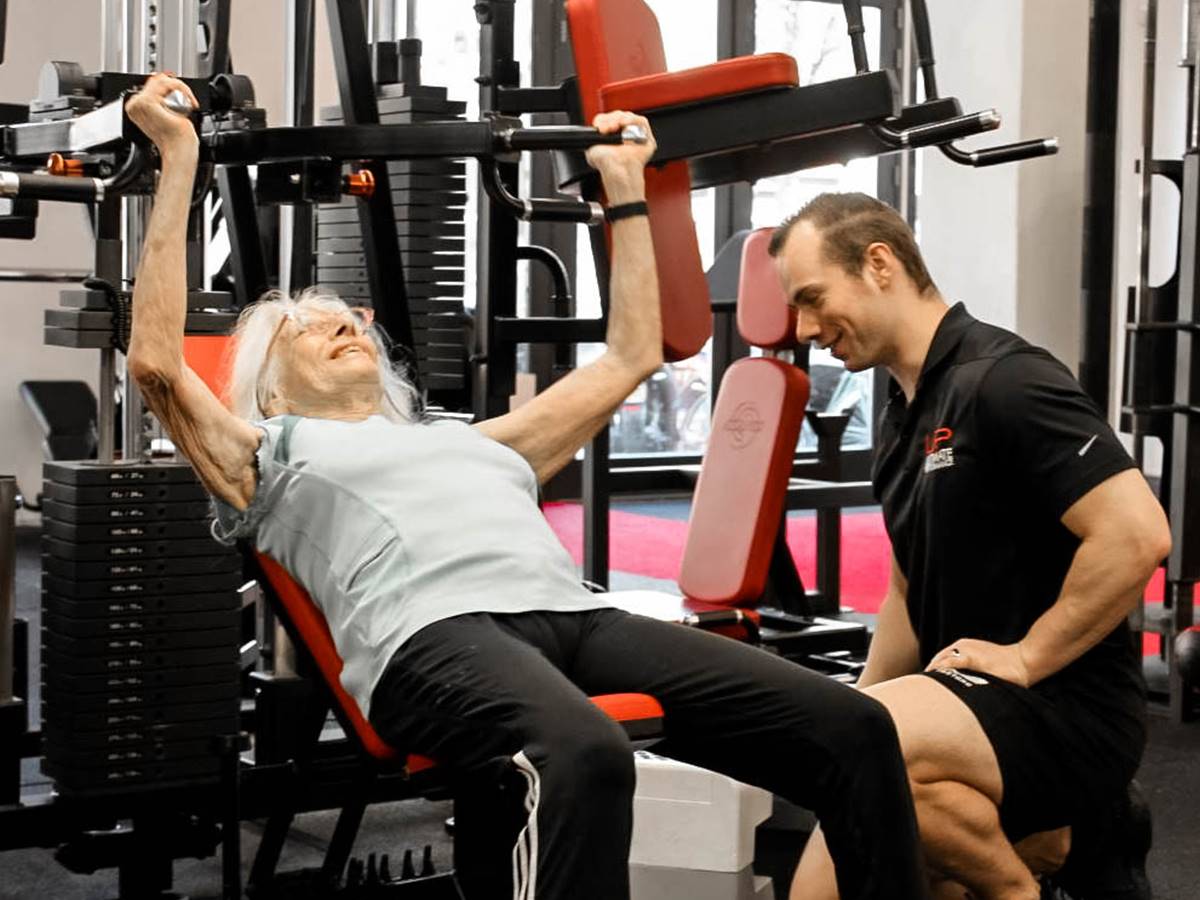 A trainer who cares

“My trainer is marvellous,” Jo said: “Considering my age, he listens to the things that are now occurring to my body and that I have to take care of. He helps me and listens to me, which is very good.

“Training with U.P. has built up my hamstring muscles, which helps me to walk such long distances. My hamstrings are strong, and I’m walking nicely now.

“I generally walk in the mornings. I don’t go out in the afternoons unless I have to, because the sidewalks are too busy, and it’s hard to keep my distance from people.”

Her daily diet is a mixture of protein-rich foods such as eggs and lean meats, and she also eats a lot of vegetables. A typical breakfast would consist of eggs with either spinach or asparagus. Jo also loves kale and includes the leafy cabbage in her diet whenever she can. 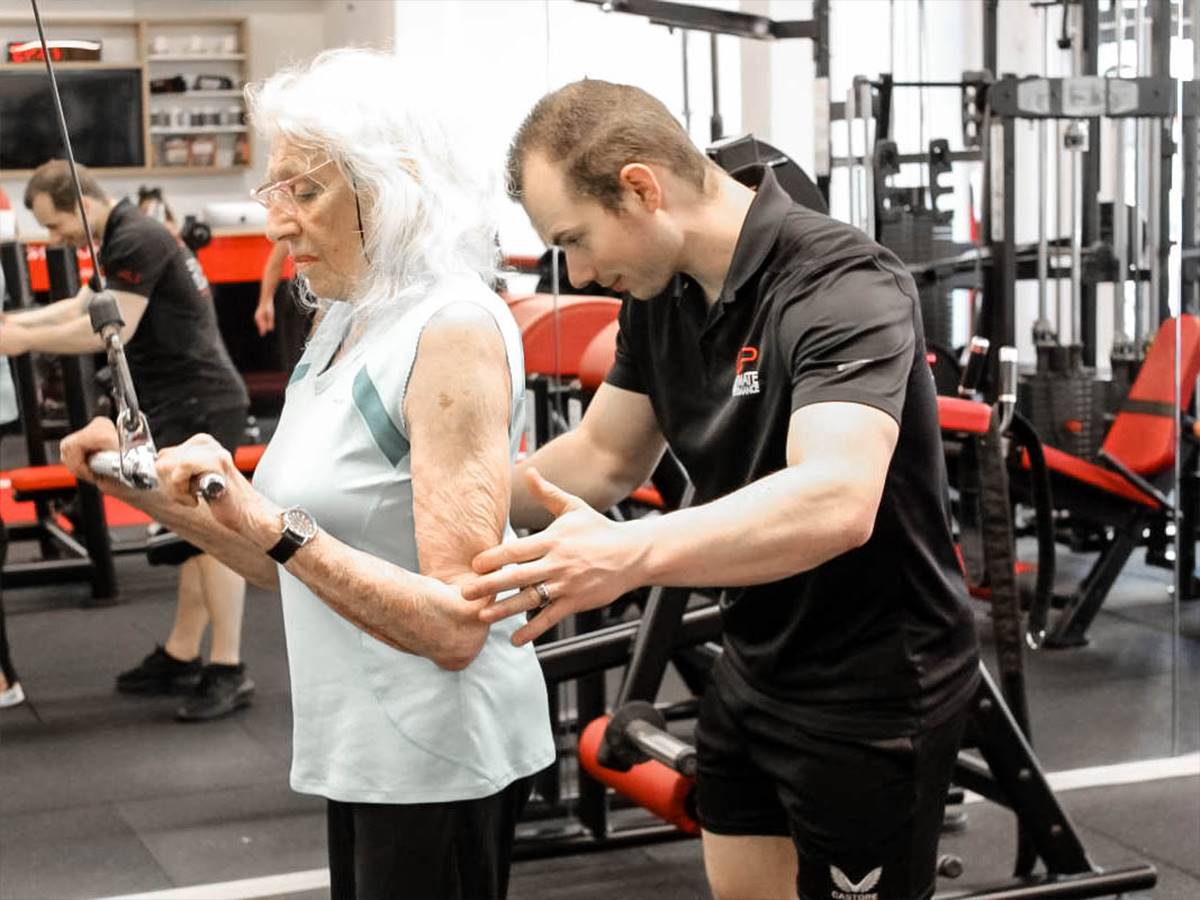 And Jo’s advice to anyone wanting to be as fit and healthy at 93 as she is: always move your body!

“If someone asked me if they were too old to go to the gym, I would look them over first, and either agree or not!” she said.

“But the one thing I would say is to move. Always be moving. If you’ve been sitting for 20 minutes, get up and walk somewhere. I’m lucky that I have a big place and so I walk automatically. I assume that’s why I’m in such good shape. It doesn’t feel right to me to be sitting for long periods. I’ve always been active.”

And she has no plans to give up her routine anytime soon, even though it would tire out most people half her age. She said: “I will carry on for as I long as I can.”

Inspired to stay fit, capable and healthy for life like Jo?

Whatever your age, it’s never too late to invest in your health. See how a tailor-made personal training plan with U.P. can give you lifelong strength, fitness and confidence like Jo.