Daniel went from a deskbound, overweight office worker to fitness addict in 20 weeks.

Forty-two and fat, Daniel realized that the only thing that would get him fit was a professional personal training programme.

He had heard about Ultimate Performance and checked it out online.

His first reaction was disbelief – he thought it looked ‘too good to be true’.

“You see all these results, and there’s a little disclaimer saying ‘not everyone‘s going to get this.’ 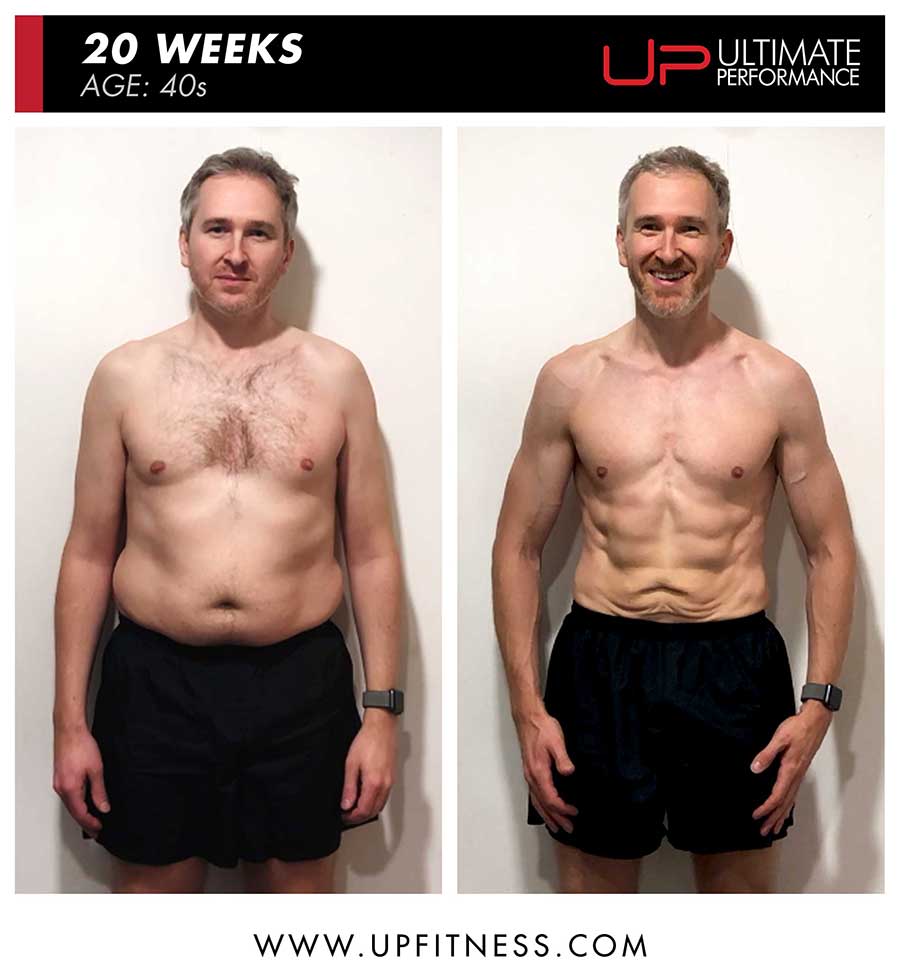 “So, I reached out to some friends, and I spoke to a couple of people who had done it, and they said it totally works but you‘ve got to be really committed and if you‘re going to do it, you have to put 100% in to get the results.”

Daniel didn’t think twice – he signed up on his first visit to U.P. and 20 weeks later his commitment and effort paid off in incredible fashion

Now he is almost 10kg lighter and has lost 19% body fat to build an enviable physique. 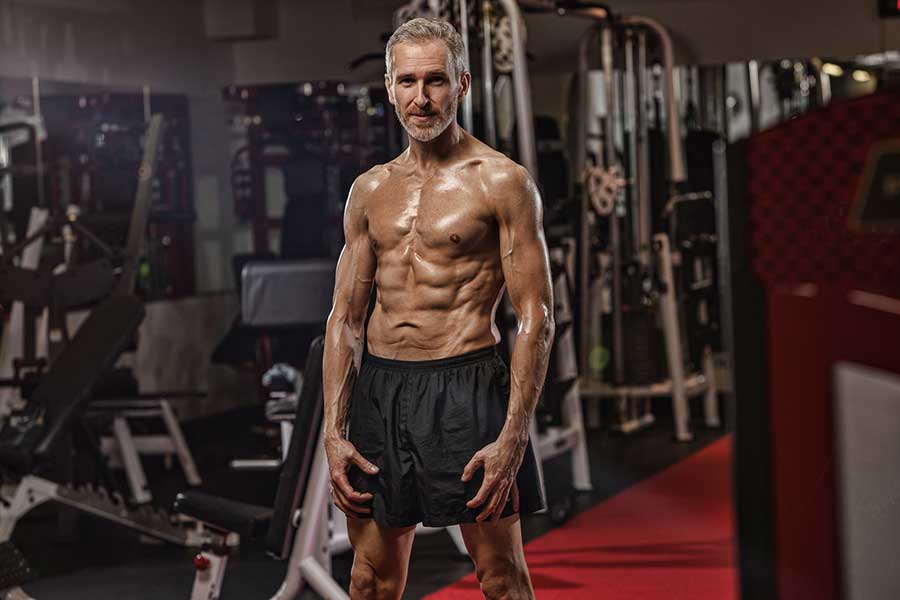 Like so many busy city-living men, Daniel’s weight problems were caused by a sedentary lifestyle stuck behind a desk.

With age, his activity levels dropped and his metabolism slowed down, and as work and family life became more hectic, his body began to suffer.

The inches and pounds were slowly creeping up and he didn’t even realise until one day he realised enough was enough.

“My diet and lifestyle before U.P. were pretty disastrous on all counts. I sit at a desk all day, and I was eating all the wrong things.

“I was in pretty strong denial. I don‘t think I saw the fat person to quite the extent I was when I looked in the mirror. 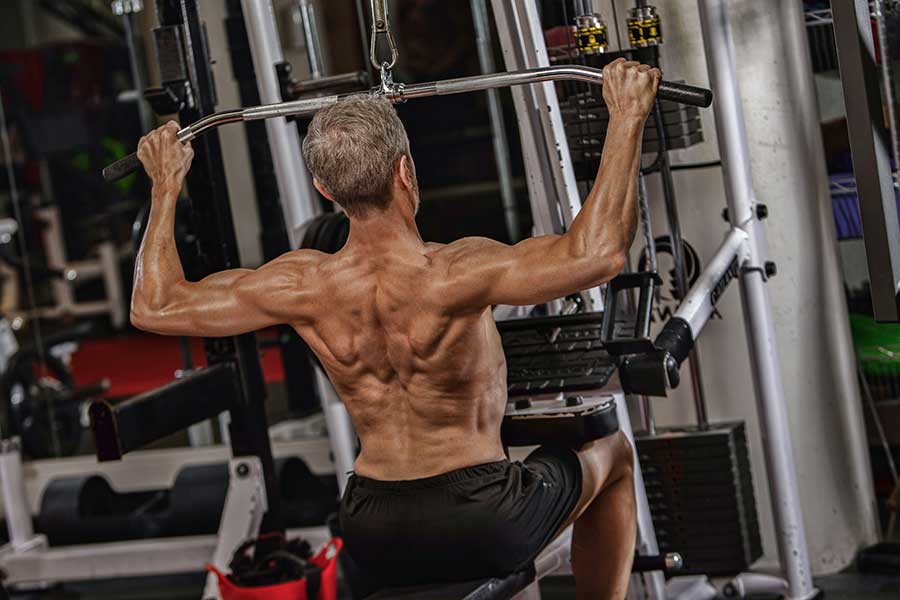 “I knew something was wrong and one day I kind of thought that you’re either getting worse or you’re getting better, there’s no kind of standing still with your health.

“But I think it’s only when I look back at my ‘before’ photos that I realized ‘oh wow! I really was a mess then.” 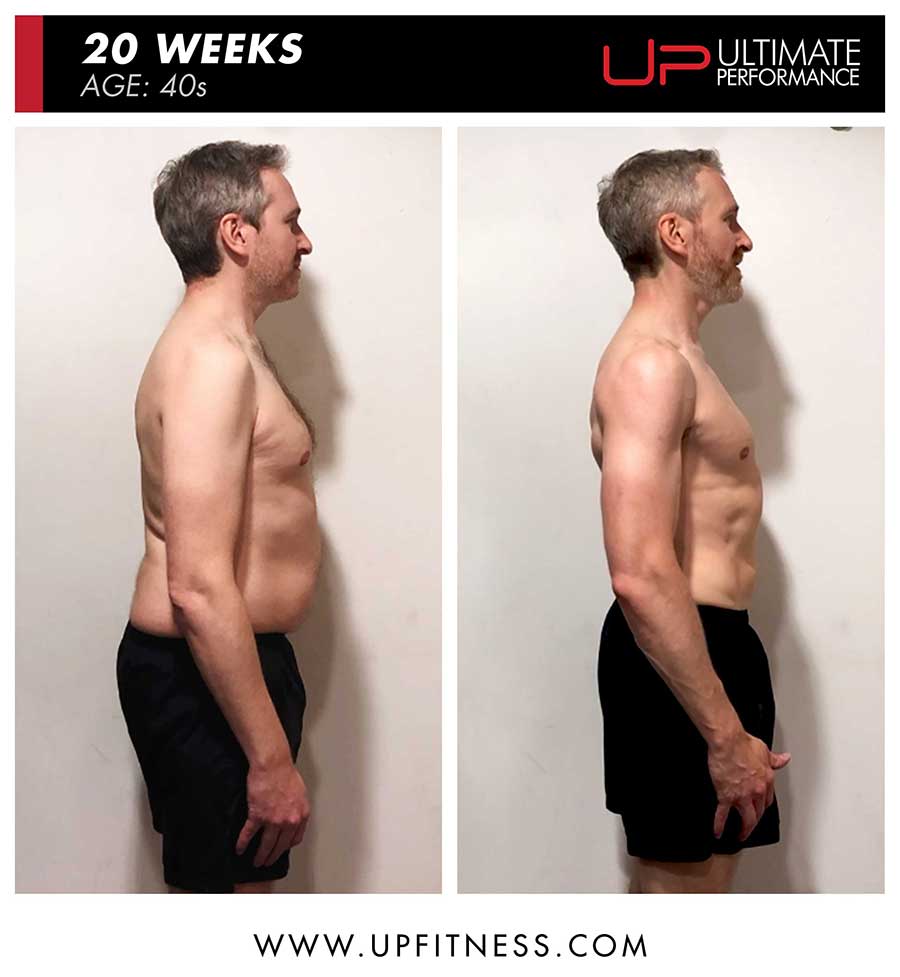 START YOUR OWN WEIGHT LOSS JOURNEY WITH A BESPOKE PERSONAL TRAINING PROGRAMME.

What really helped was when his wife signed up alongside him a couple of weeks in and it really motivated him to stay the course and get the results he wanted.

“It’s a bit of a shock when you start. It’s a whole lifestyle change – you know totally changing my diet, spending a lot of time exercising. I lost two and a half kilos in the first two weeks which is a really good feeling at the start.”

Like many people, Daniel had spent some time in the gym in his younger days. In his 20s, he had even tried his hand at weight training. But bad posture and incorrect training turned him off.

With U.P. he not only saw results, but also learned the nuances of weight training and nutrition. 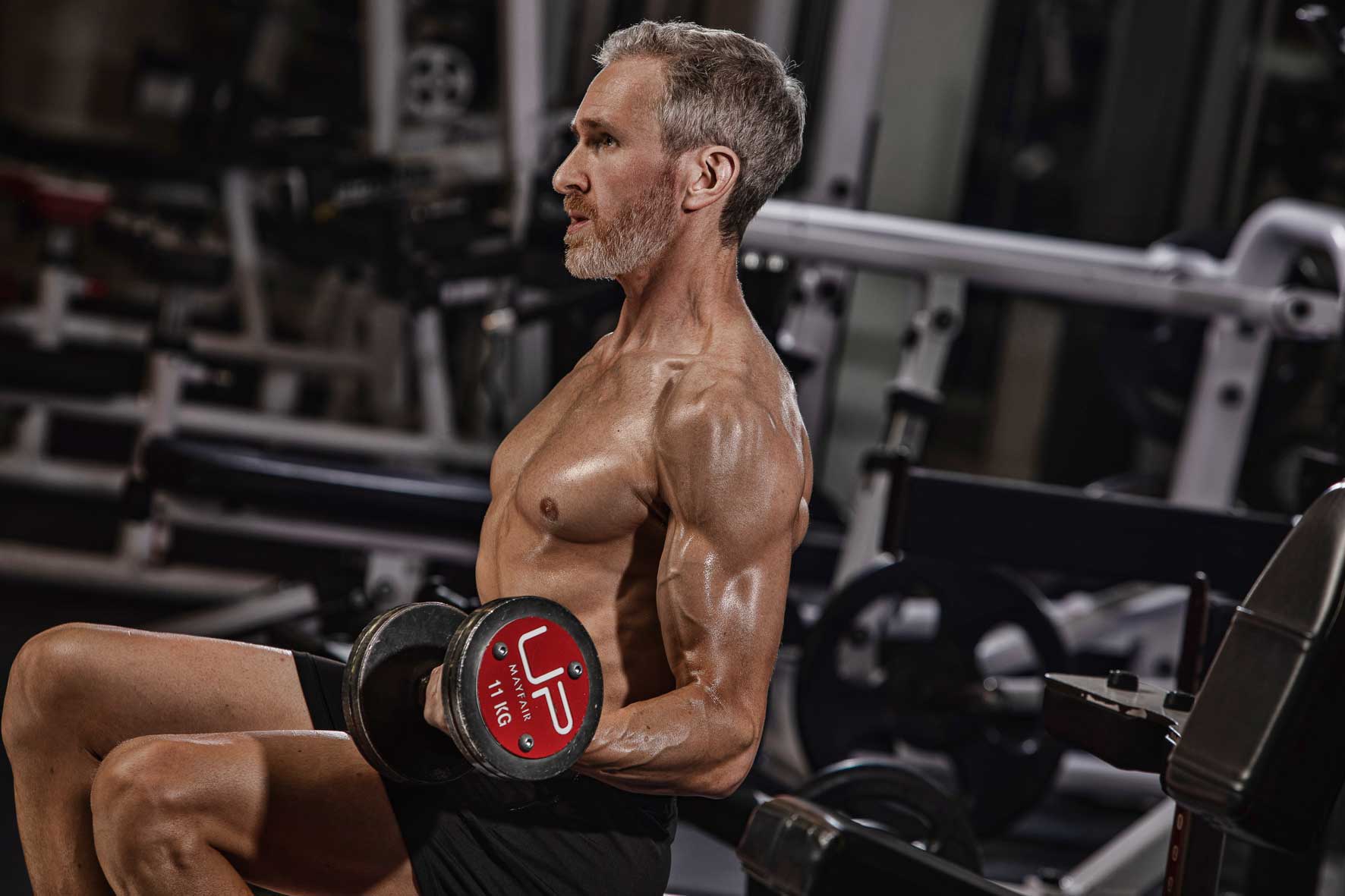 “On the training front, one of the fundamental things I’ve learned is actually what I’m capable of and how hard I can go now that I know what I‘m doing. There’s a whole art to it; it’s not just moving a piece of metal; there’s so much technique – feeling the muscle, isolating it, getting the motion right, not hurting yourself through an incorrect form.

“I can feel like I’ve improved a whole ton! 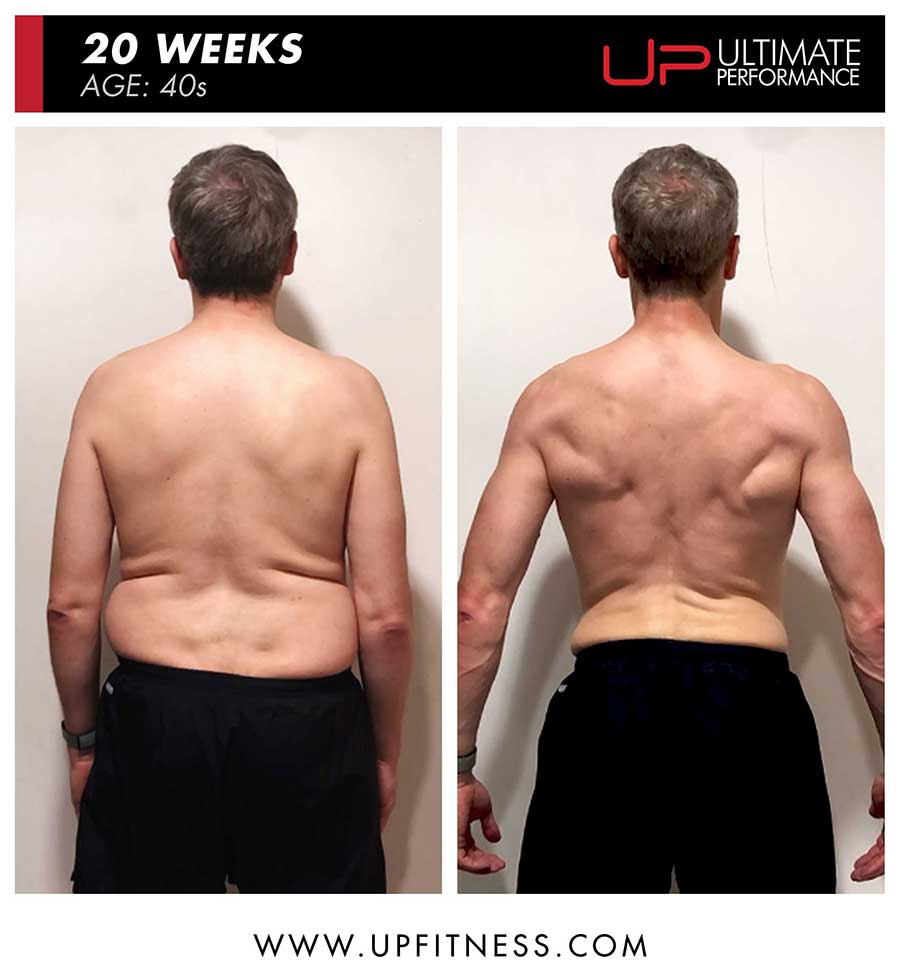 After 20 weeks at U.P., Daniel is back in control of his life. Apart from the jaw-dropping physical changes, he also experienced an overall improvement in his day-to-day life.

“I’ve got a ton more energy than I used to have, both physically and mentally. Just in small things – like I have a heavy backpack, I have to lug to the station every morning, and it’s nearly a mile. It used to bother me, whereas now the weight is pretty much insignificant. 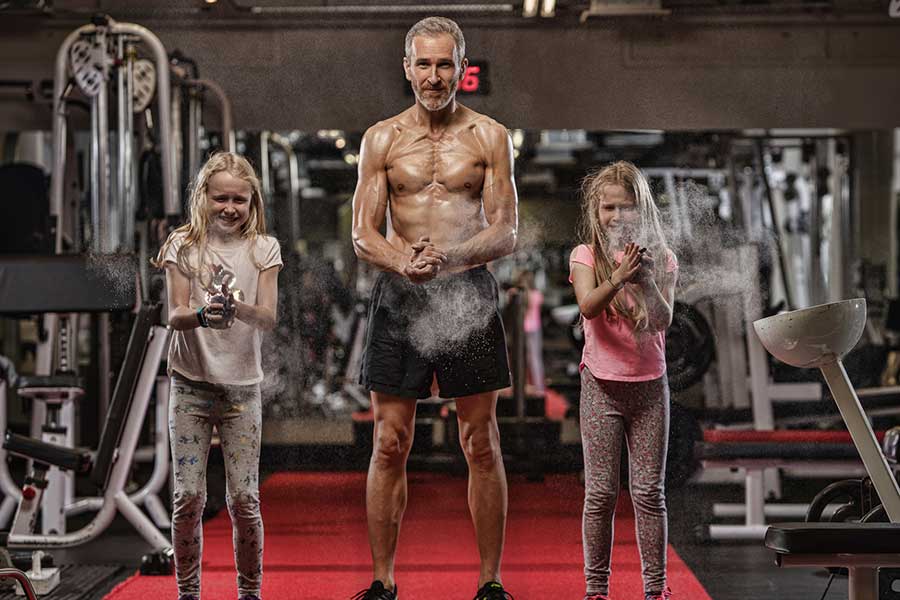 Daniel with his daughters, getting ready to lift some weights!

“If I hadn’t gone with U.P. I would still be sitting on my desk and probably would have put on another kilo and been no better off.

“Just from the effect it’s had on me, four other people have started training at U.P. – obviously, this thing works!”

LIKE DANIEL, YOU CAN MAKE DRAMATIC CHANGES IN YOUR HEALTH AND FITNESS WITH U.P. FILL IN THE ENQUIRY FORM TO GET STARTED ON YOUR PERSONAL TRAINING JOURNEY