Alex is back on top of his game on the football field and in the office after his transformation at Ultimate Performance.

He had always been fit and healthy, but over the past two years his motivation had waned, his diet had gone downhill and he started gaining weight.

Alex kept suffering muscle injuries at football and the constant setbacks meant he lost motivation for the game, and had fallen out of love with the gym.

Bad eating habits had crept into his diet, weekends full of junk food and alcohol were spilling over into the week, and his hectic work schedule meant he began making excuses not to train.

But starting a body transformation at Ultimate Performance re-ignited the fire in his belly to train, got him motivated again, and gave him the structure, accountability and knowledge he needed on diet to get back in shape.

Not even an eight-week lay-off from a broken rib could stop his tremendous progress in making an impressive 32-week transformation.

He lost 13kg, shed two thirds of his body fat, and he’s back out on the football field, enjoying the game injury-free and in the form of his life. 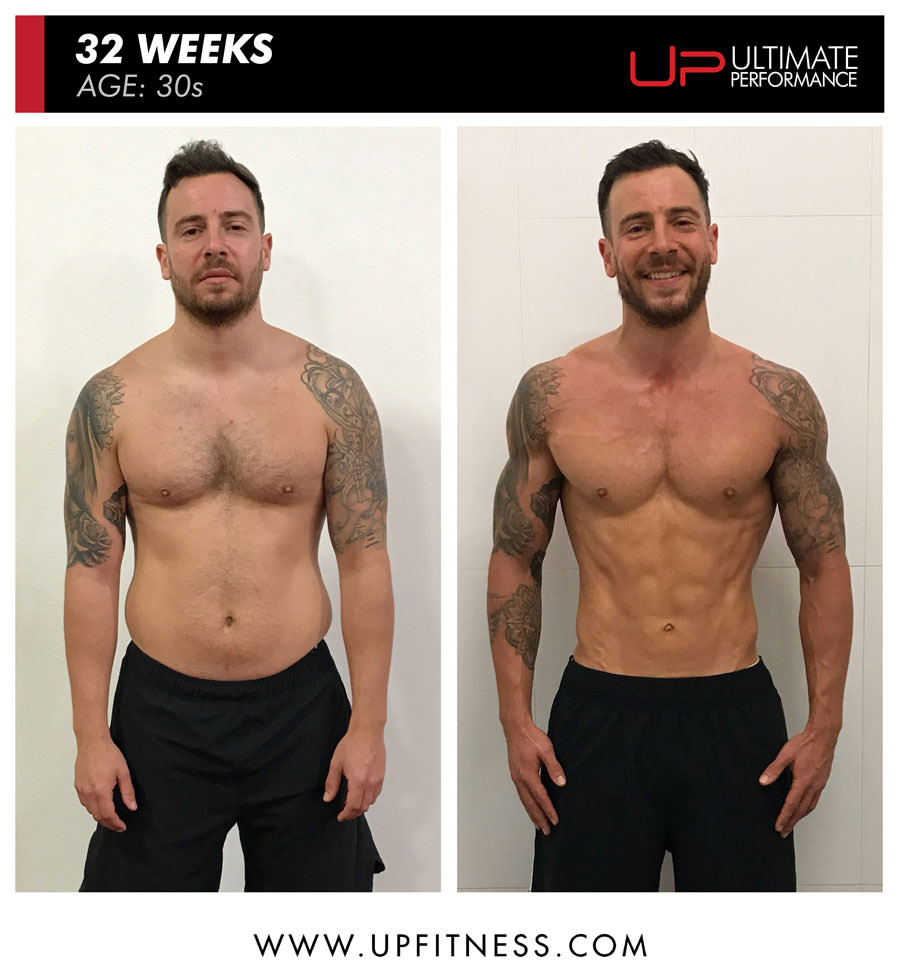 LEARN MORE ABOUT WHAT OUR TRANSFORMATIONS OFFER – ENQUIRE TODAY

“My results were much better than I ever thought they would be.”

Alex explains how his diet and lifestyle went downhill, what he changed at U.P. to turn things around, and how he made his impressive transformation.

What were your motivations for starting a transformation journey with U.P.?

I used to be pretty active with the gym and football, and thought I ate well. But I kept getting injured at football and slowly lost the motivation for football and the gym and I was eating more and more without really noticing.

Then we had a holiday to Bali for a mate’s wedding and when I got back, I injured my ligaments in my knee and wasn’t able to train.

I completely lost the motivation for training and needed to get out of a rut – I’d hit that long 30-plus hours working in an office and over-indulging.

My brother in the UK had done a U.P. training plan and he raved about them. I take what he says seriously on this as he runs his own gym and he wanted to experience what else is practiced so he is always learning, and he couldn’t recommend them highly enough.

So I started following U.P. on Instagram and thought I’d give it a crack.

How were you feeling both physically and mentally before starting with U.P.?

I’d had a PT in the UK and seen the PT’s in Fitness First and didn’t really rate what I had seen or experienced.

I also think my ego and personality was that I thought I knew how to train and eat and didn’t see what someone was going to tell me was going to be any different.

What was your diet and lifestyle like before you started your transformation with U.P.?

I would eat out and drink a lot – two or three times a week socially, and probably another one or two times professionally, because of my job.

When I was younger I would do cardio before work and then the gym or football after work, but during the past two years this had really slacked off and that had been replicated in my diet.

When you’re active and healthy it’s really easy to eat well, but when you’re not and you’re drinking loads, it’s easy for your diet to go downhill too and that’s what had happened.

How did your diet and lifestyle change when you started your transformation with U.P.?

It changed pretty dramatically. In the week, I would probably have bread, potato and rice each day, and then either a curry, a pizza or a roast at the weekend. That was cut out immediately as I went on a zero-carb protocol.

I cut out snacking too and ended up eating celery at my desk in between meals which got a laugh from the office. 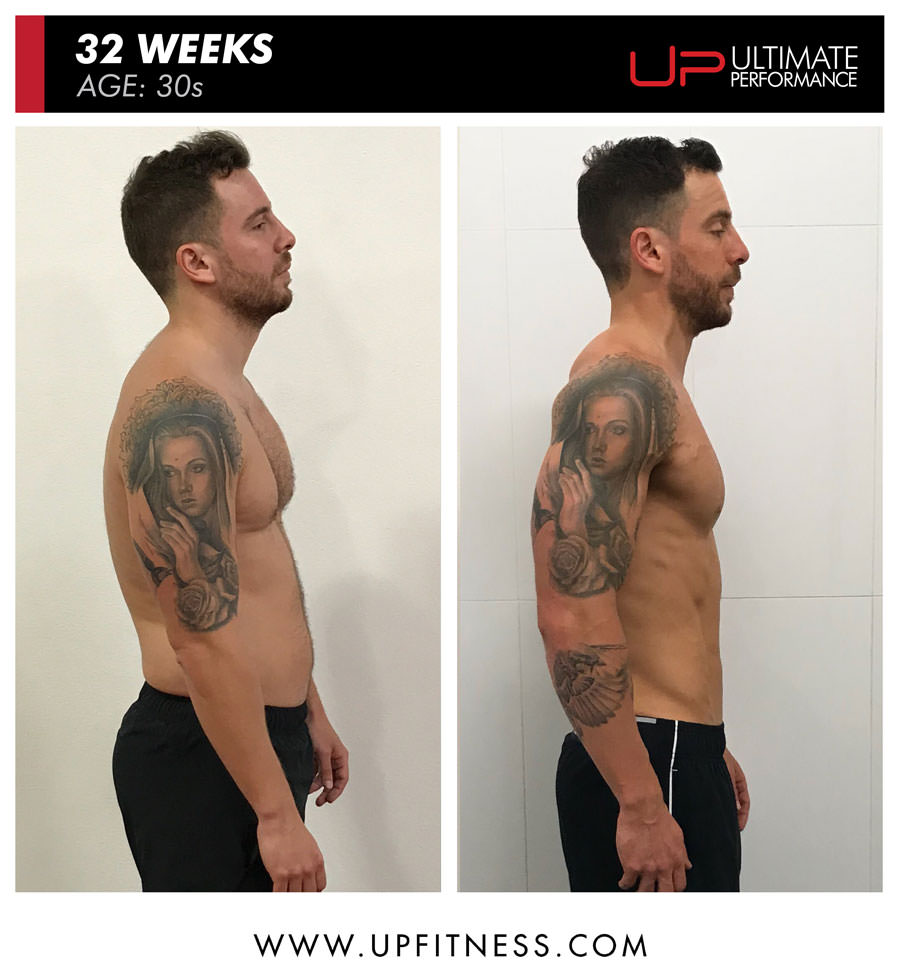 READY TO GET STARTED WITH YOUR TRANSFORMATION? TAKE THE FIRST STEP

Drinking was a big one for me to cut out and the first few weeks I didn’t touch a drop, even going to lengths where I would pretend and order a soda water with a lime wedge at work functions.

What effect did this have on your health, performance, lifestyle and energy levels?

Cutting carbs at breakfast and lunch has probably had the biggest impact on me full stop.

I always thought that carb-heavy meals in the morning and lunch and then none at night was best, as I trained at the gym after work.

I no longer drop off at 2 p.m. and I get through to the end of the day with lots of energy.

Also having a protein and fat-based breakfast actually fills me up until lunch, which eggs on toast didn’t previously do.

What had been the biggest mistake you were making on your diet before and how did you change it at U.P.?

In the past, I had eaten well in the week and pigged out at the weekend, but what had happened was this had crept into the week and the meals were slowly getting bigger.

Doing a meal plan and prepping meant it was harder for me to make excuses. In the past, I would have hidden behind the fact I had done some squats on a Monday after work so I could then go and smash loads of carbs and protein for the whole week, but then I didn’t train the other days so I was just eating loads.

Keeping it simple and just tracking meats, starchy carbs and fats for the duration has made it pretty easy to know what to carry on beyond the training plan, so that can be continued.

How did you find the training and did it fit around your busy lifestyle?

I’m a morning person, so I really buzzed off training in the morning before work as it set me up for my day.

To start with, I wasn’t really bought into the training and Abi, my trainer, to his massive credit, noticed this and tailored the plan to what got the most out of me and I started to notice drastic results and huge improvements on my strength in areas I previously dismissed as never being able to improve.

The biggest setback was that Christmas came up and I had family visiting and then I damaged my rib at football, so that knocked about eight weeks off my training. But credit to Abi again, he kept me engaged while I couldn’t train and my weight didn’t go up, whereas in the past I would have become completely demotivated, so even though I wasn’t paying to train, he went that extra mile and kept me in check so that it didn’t set me back too far.

What were the most important things you learned during your journey and what really worked for you in helping you make your transformation?

Cut the bullsh*t, stop lying to yourself and making excuses.

I would hide behind “I don’t have enough time” or “I don’t like cardio” or “my chest and shoulders have long-term injuries so they’ll never get stronger” and used that as an excuse to do what I wanted instead of what I needed. 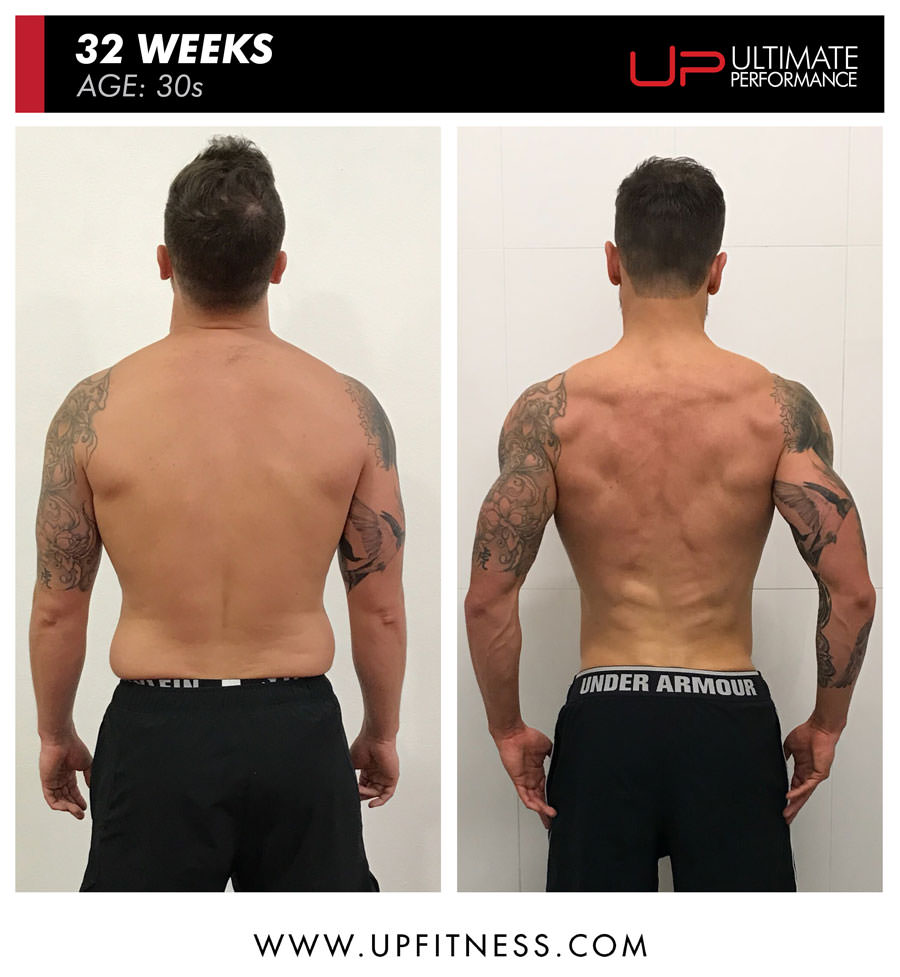 Abi gave me straight chat instead of padding my ego with what I wanted to hear, which also meant when you did get that ‘well done’ you knew it was genuine.

How has doing this transformation changed you and do you think it will benefit you going forward?

I now have a much more realistic approach to fitness and training. I always thought I could out-train my diet, but you can see now that it’s not the case and you don’t actually have to sacrifice that much to get in better shape, you just actually have to want to do it and not lie to yourself about it.

Would you recommend U.P.?

Definitely! I wouldn’t just recommend it to people wanting to lose weight, but also people who want to give themselves a base to train from who maybe either get intimidated by the number of people in a gym, or alternatively, like I was, let their ego get in the way in a packed gym and want to appear to be lifting loads or know what they are doing, etc.

Having a gym that isn’t packed and is just one-on-one strips away your ego and allows you to focus on training properly instead of incorrectly just to appear to be lifting more.

Also Abi has been a top bloke and you can see the trainers at U.P. want to force that change in you so they’re good at finding what will motivate you and get the best out of you.

If the trainer you’re working with is genuinely interested in what they do, that gets such a good reaction and engages you.

And, as I mentioned earlier, little things like checking up on you when you can’t train and keeping you focused helped me so much, as previously I would have just let it all go off to waste!

Alex has achieved an incredible change since he started at U.P. Are you ready to find out more or start your own journey? Simply Fill in the form below.