When Anita’s youngest daughter turned six, it hit home how just how long she had been trying to lose weight on her own with no success.

With two daughters, she wanted to give them a strong, fit and healthy female role model to look up to.

But with her job flitting between airport lounges and restaurants, gaining any kind of control over her eating and exercise regime felt impossible.

Putting her health in the hands of the professionals at Ultimate Performance has proved to be the best investment Anita could make.

Transforming her body has given her strength and confidence that her daughters can see and empowered her to take control of her diet and training for good.

“Now I feel a lot more confident because I feel physically and mentally strong.

“I’m a lot more willing to put myself into situations where I come under scrutiny and putting myself out there more.

“I feel proud of my achievements, and I’m relieved because I’ve been trying to achieve this for many years and just could not do it on my own.”

Thinking back to before she started at U.P., she was making so many mistakes.

But knowing what she knows now, she can see how it was holding her back.

“I thought my diet and lifestyle before joining U.P. was very healthy with my food under control and my exercise under control.

“But what I realised was that I was exercising the wrong way and spending a lot of time doing a lot of repetitive cardio and eating more mindlessly. I didn’t realise that until I joined U.P.

“My main motivation was to lose weight since my youngest daughter turned six, and I realised that I wasn’t succeeding on my own despite trying different programs, losing some weight but then putting it on.

“I needed something more structured and an expert to help me through this process.” 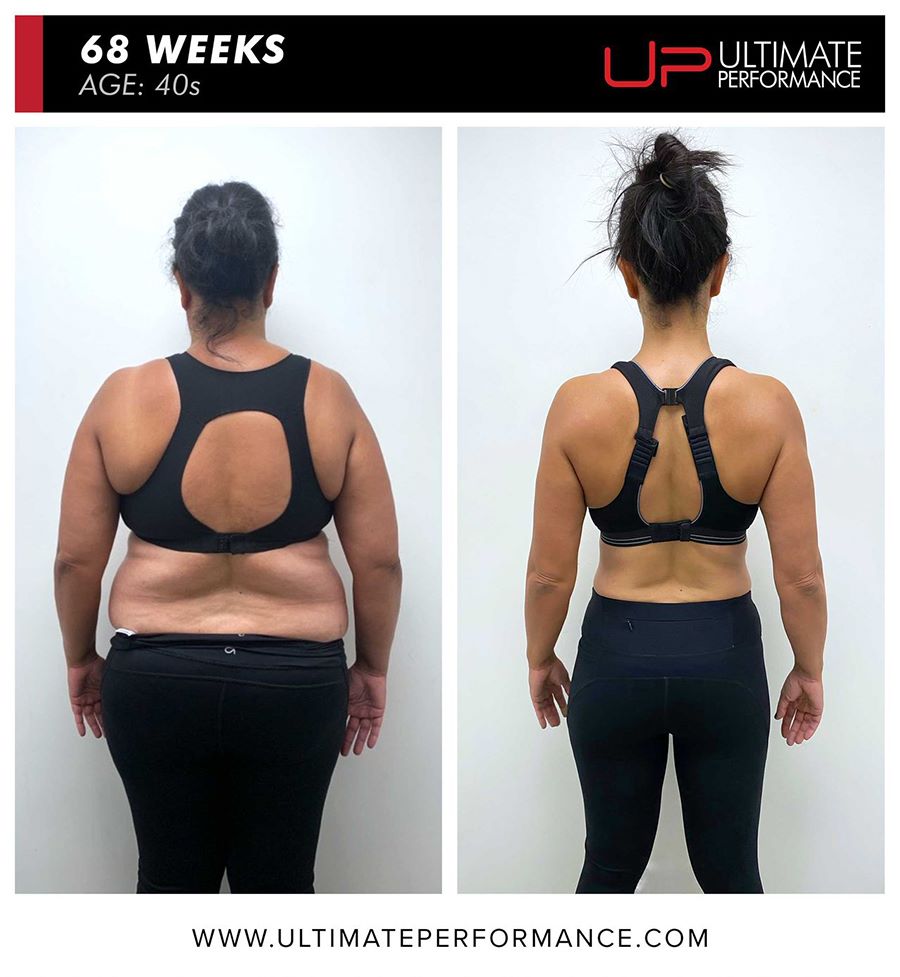 Anita’s biggest challenge when it came to getting in shape was her job.

It took her away from home, and she was flying internationally a lot of the time. Consequently, she had little control over her diet and exercise regime.

“One of the issues I had with my previous lifestyle was that I didn’t have control over it.

“Owing to the nature of my job, I spent a lot of time on the road, client dinners at airport lounges and hotel meals, and even though I felt that I could manage that, I realised it was out of control.

“I heard about U.P. because a friend of mine had some really good results from U.P., and so I asked her what she’d been doing, and she mentioned U.P. to me, and I decided to kind of investigate it further.”

Coming to U.P. helped her fundamentally change all that.

Her trainer created a personalised blueprint that she could follow in the gym and while she was away.

She learned the fundamentals of nutrition and how to manage her diet and exercise effectively while she was on the road.

After years of trying on her own to lose weight and shape up, she saw results almost immediately. 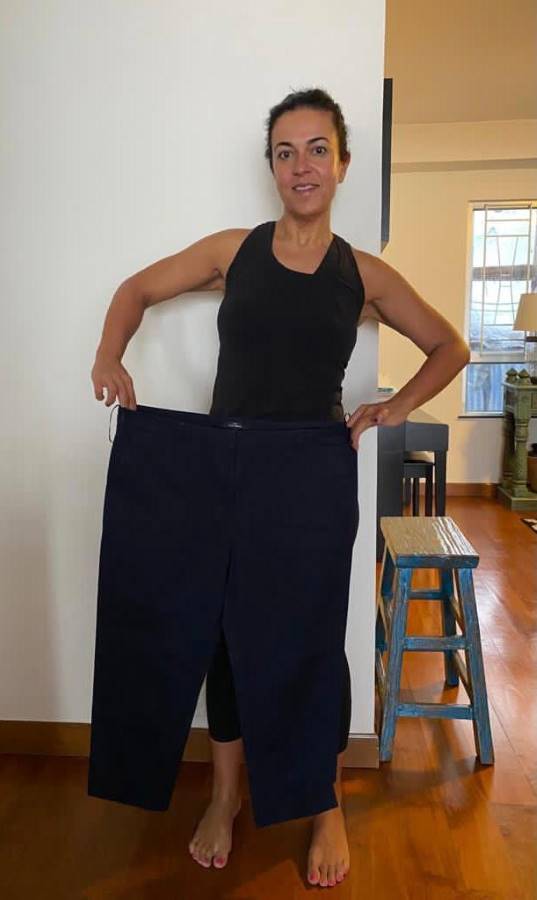 “I started noticing results straight away. The initial weight came off quickly, and the change was immediate in the first couple of weeks.”

What U.P. provides is a system tailored to the individual that is proven to work if you follow it to the letter.

It motivated her to continue pushing towards her goal – helping her lose 37kg (82lbs) and sculpt a new figure she can barely believe.

“When I saw my before, and after pictures, I didn’t feel like it was me. The picture from before feels like a different person compared to the photos now.

“For people that haven’t seen me for a while are amazed and surprised by my transformation. Quite a few people have said that it’s inspired them to tackle their weight loss journey, so I feel happy that I’ve been able to inspire somebody.”

It’s not just the physical results that have been so life-changing – it’s the benefits to Anita both at work and as a mum.

U.P.’s training has empowered Anita to face problems head-on and set an example for her daughters. 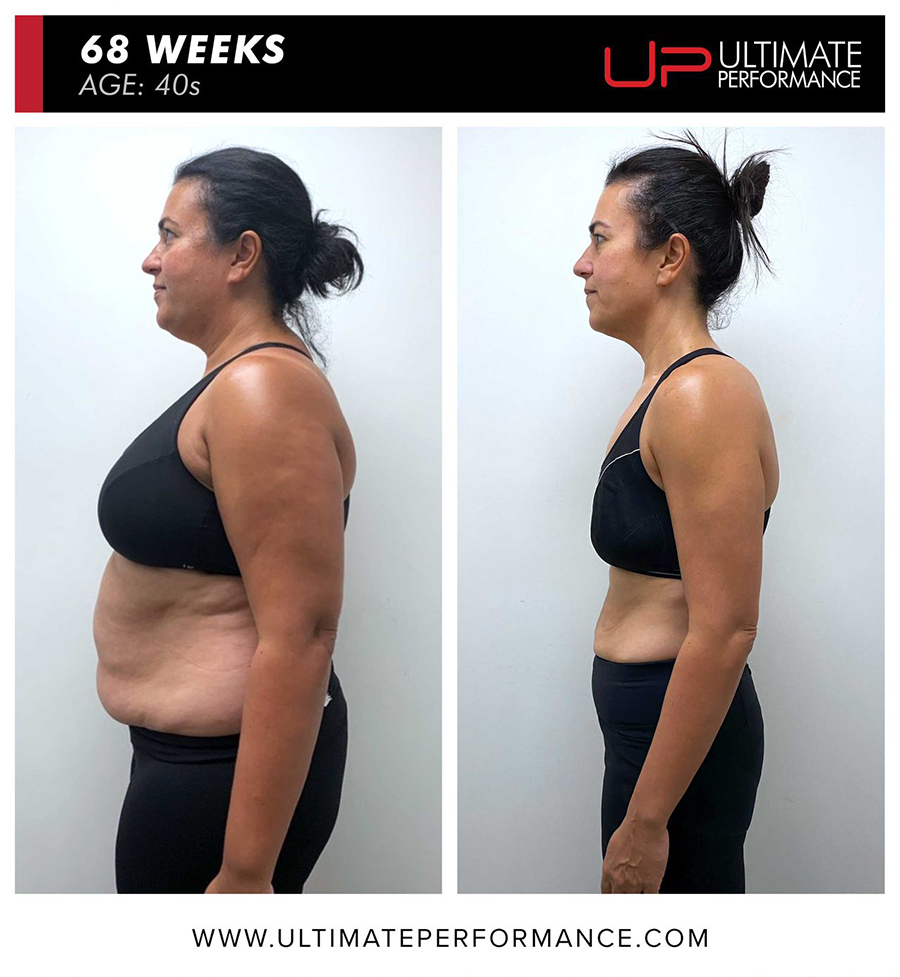 “The biggest lesson that I have learned during my time at U.P. is being consistent and the idea of having a routine. My biggest challenge is my mindset being my worst enemy, and that is why I would not have been able to do this on my own.

“Personal challenges that I’ve overcome here can be taken into my personal life, so challenges, whether they’re at work or within my family, applying that same mindset of consistency and routine and calmness, helps me through.

“Also, being in control of my diet is just very empowering as compared to before when I thought I had it under control.

“I’ve got two small daughters, and for them to see their mum sign up to a routine, stick to it, show up, and be disciplined in her lifestyle, has been great for them to see.”

Friends recommended U.P. to Anita. Now she has gone through the U.P. experience and achieved life-changing results, she is doing the same.

“I would say to a friend or a colleague about joining U.P. to not hesitate for a second. It’s tough because it’s a full commitment to the diet and workout, but you get results.

“I have a lot of friends and colleagues who do programs, but there’s been no progress. Committing fully to a program like this will give them so many more benefits than they might even realise when they first start.”

IF YOU DON’T KNOW WHERE TO START TO GET FIT, PUT YOUR HEALTH IN OUR HANDS LIKE ANITA AND SEE WHAT YOU CAN ACHIEVE. ENQUIRE ON THE FORM BELOW…