Jenny thought losing 10kg would be a ‘miracle’ when she first started at Ultimate Performance…but now she’s lost nearly double that!

She had struggled with weight issues since she was young.

But after a lifetime of failed diets and exercise routines and even trying costly ‘fat freezing’ treatments, she just didn’t know what to do next.

Jenny was on the verge of going down the drastic liposuction route when luckily a friend recommended Ultimate Performance Dubai.

Just 60 gym sessions later and Jenny has changed her life.

She says it’s the best decision she’s ever made. It saved her from going under the knife and has shown her what hard work, consistency and education can achieve – real health and wellbeing that can last a lifetime.

“My first goal was to lose 10kg, and that was a huge thing because I have never gotten below the 68kg mark. I started at 74kg, and now I am 55kg!

“I’ve never been this slim in my entire life – not as a child, not as a teenager, and certainly not as an adult!” 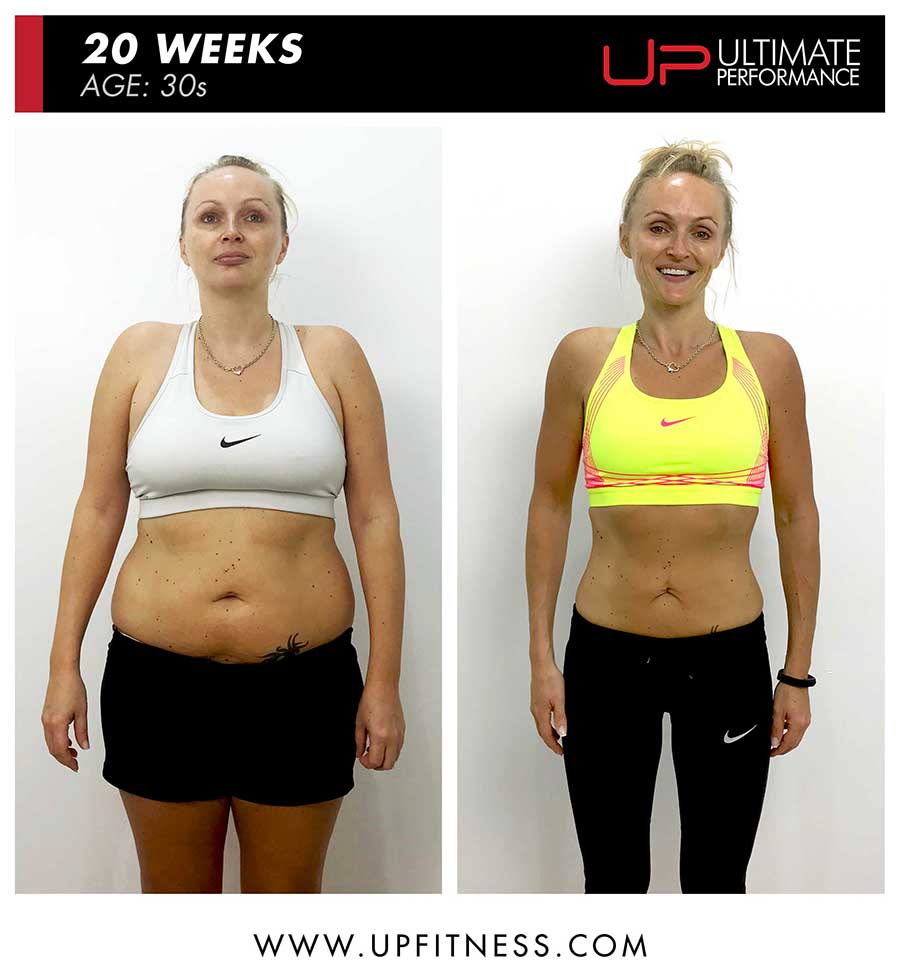 JENNY HAS MADE IMMENSE PROGRESS SINCE SHE STARTED PERSONAL TRAINING WITH US.IF YOU’VE BEEN INSPIRED BY HER JOURNEY, FIND OUT HOW WE CAN HELP YOU IMPROVE YOUR FITNESS.

Before coming to U.P. Dubai, Jenny says she had always been a bit chubby, but the weight issue took over her life after she returned from her long backpacking trip.

Lack of activity quickly added extra kilos to her body, and it reached a stage where it started affecting her mental wellbeing too.

“Before U.P., I was stuck in a vicious cycle where I simply couldn’t sleep, sometimes for days on end, which left me cranky and bad-tempered.

“It even got to the point where I suffered small anxiety attacks in the evenings just thinking about having to get up for work the next day.

“So I would ‘self-medicate’ with one or two bottles of wine, which, of course, helped me sleep (although not well) but did nothing for my mood, energy levels or overall well-being.

“And then, of course, the hangover and comfort food followed. Not that it would show, but I just felt crap (for lack of a better word) all the time!

“I think the mental things were in large part connected to the physical things because I didn’t feel good in my own body and staying home and getting drunk was a better option than trying to figure out what to wear and going out.”

But almost immediately Jenny was able to break that destructive cycle on her transformation programme at U.P. 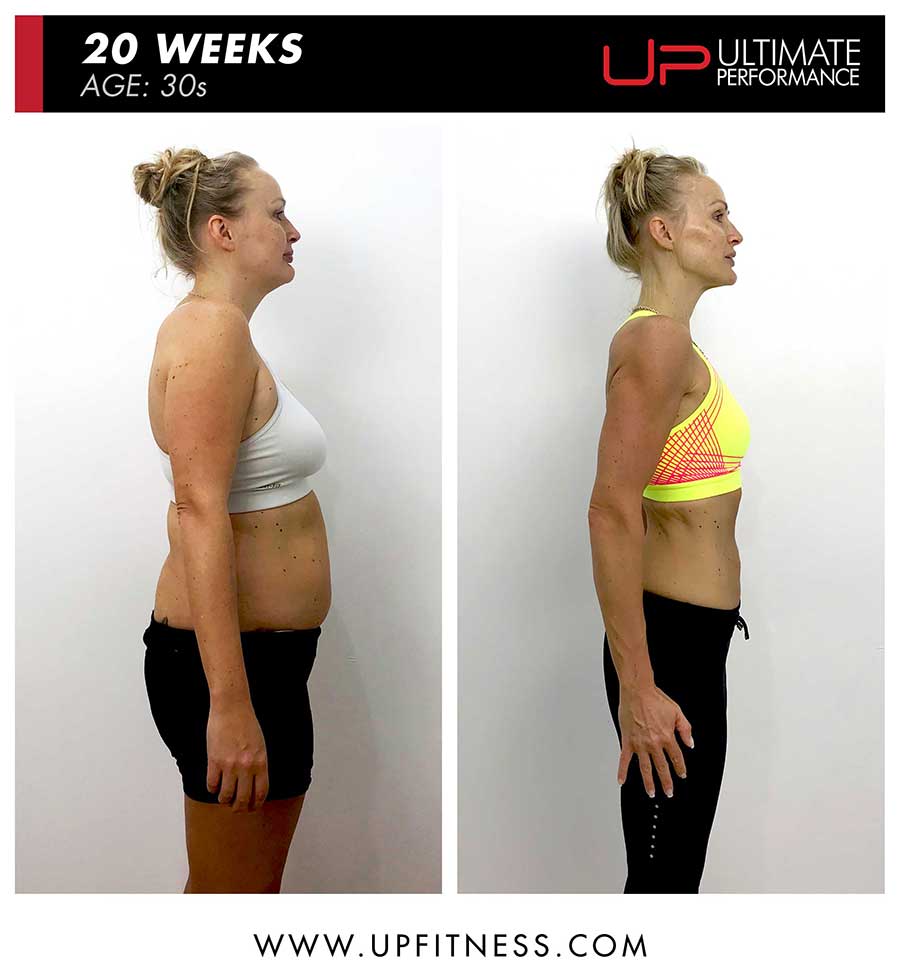 As she began to drop weight and get stronger in the gym, all her associated problems quickly started melting away.

The structure and balance U.P. brought to her life resonated beyond just the physical changes.

“I think for me one of the biggest things was sleep. Since I started, I not only sleep much better; I also feel much better the next day. I’m no longer easily agitated or short with people – I’m just much happier. And I have tons more energy!

“I had become more and more of a couch potato; I thought I earned that by working all week, but now I still work all week plus I work out, and on the weekends I can’t sit still!

“I don’t want to be sitting in front of the TV anymore; I feel like after 10 minutes, I just need to get up do something.” 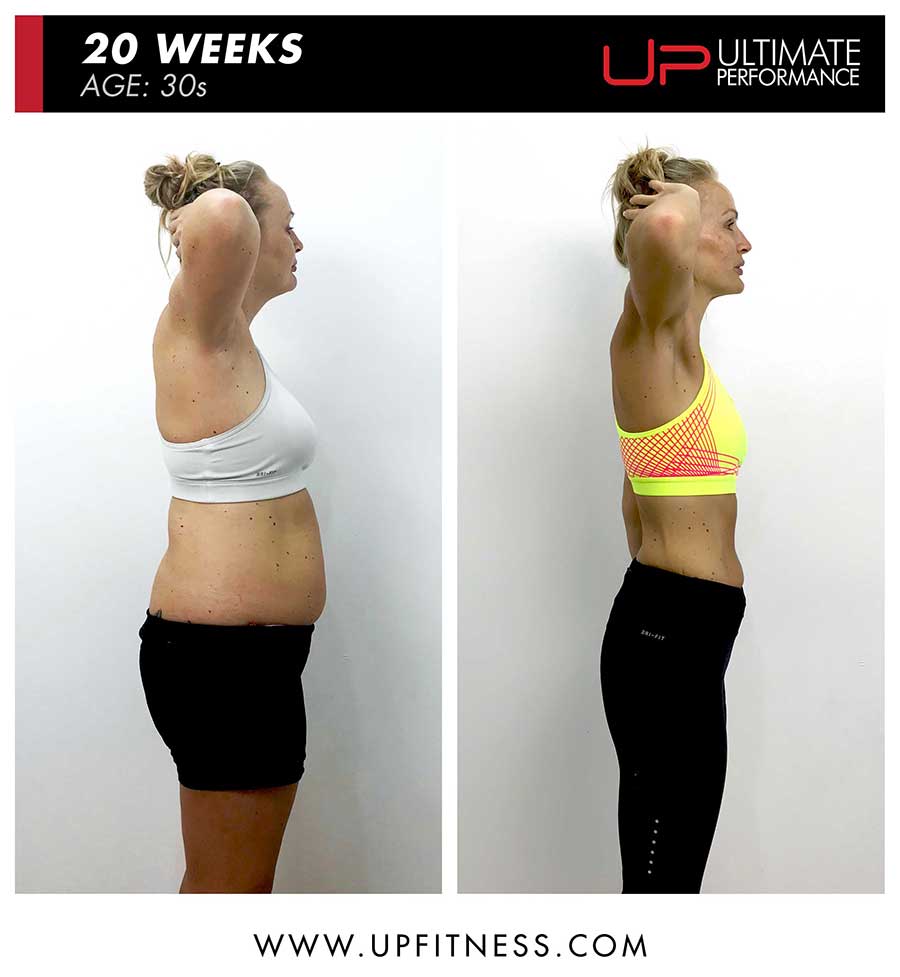 JENNY’S PROVED THAT ANYONE CAN MAKE A LIFESTYLE CHANGE IF THEY PUT THEIR MIND TO IT.
GET IN TOUCH AND WE’LL HELP YOU GET STARTED.

Jenny credits her physical and mental transformation to the super-supportive U.P. training culture.

The accountability and the team spirit she found at U.P. is what helped her stick with the programme and achieve quick results.

“What truly made the difference for me was having someone by my side on this journey and the accountability that comes with that!

“My trainer, Scott, was always there when I had any questions or needed a pep-talk (which I needed a lot, especially in the beginning).

“But most importantly, he was in my head 24/7 (the angel on my shoulder whenever I wrestled with temptation), which certainly kept me going and saved me thousands of calories!”

“I didn’t want to let him down – he believed in me, so I believed in myself. I think the reason why most of us (including me) fail, is that once it gets frustrating, giving up isn’t far behind.” 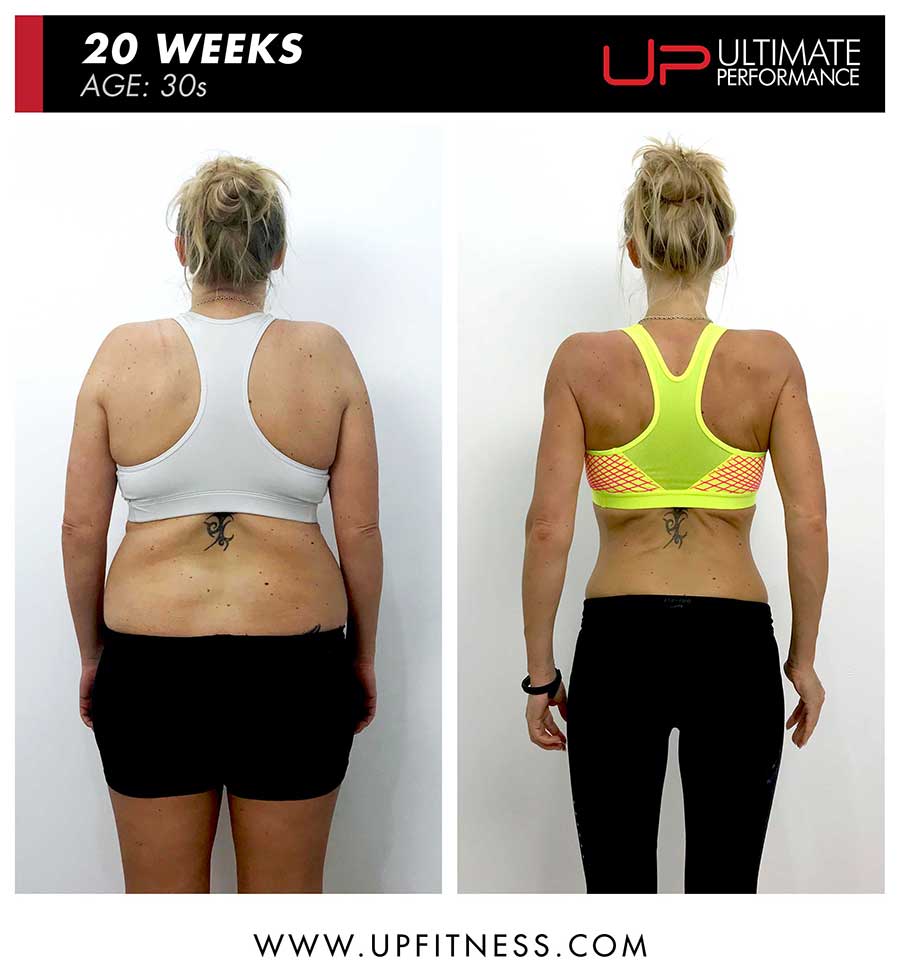 Jenny loves her new body. But perhaps what is most gratifying about the whole experience is having found a love of exercise.

Once you can find real joy in working out, you are set for life.

“I’ve gone through years and years of gyms, running and all kinds of different exercises but I was always just doing them so I wouldn’t get any fatter. Whereas this I actually enjoy. I always envied people who said they were addicted to exercise, now I can count myself as one of them!”

From toying with the idea of a quick-fix liposuction solution, to 20 weeks later gaining an amazing new figure, a new-found confidence and understanding of training and nutrition , Jenny believes it has been a worthy investment.

“Price-wise I think it’s probably one of the most expensive things I have done, but then I can’t put a price on the way I feel right now.”

“There is no secret, no magic potion… it requires a lot of hard work and commitment, but U.P. and ultimately your trainer will set you up with the right tools and will be with you every step of the way!”

“This may sound cliché or at least very cheesy but joining U.P. has changed my life!”

Jenny’s made big changes and worked hard to reach her goals – with help from us, you can too! Fill in the form below to find out how we can help you take your fitness to the next level.